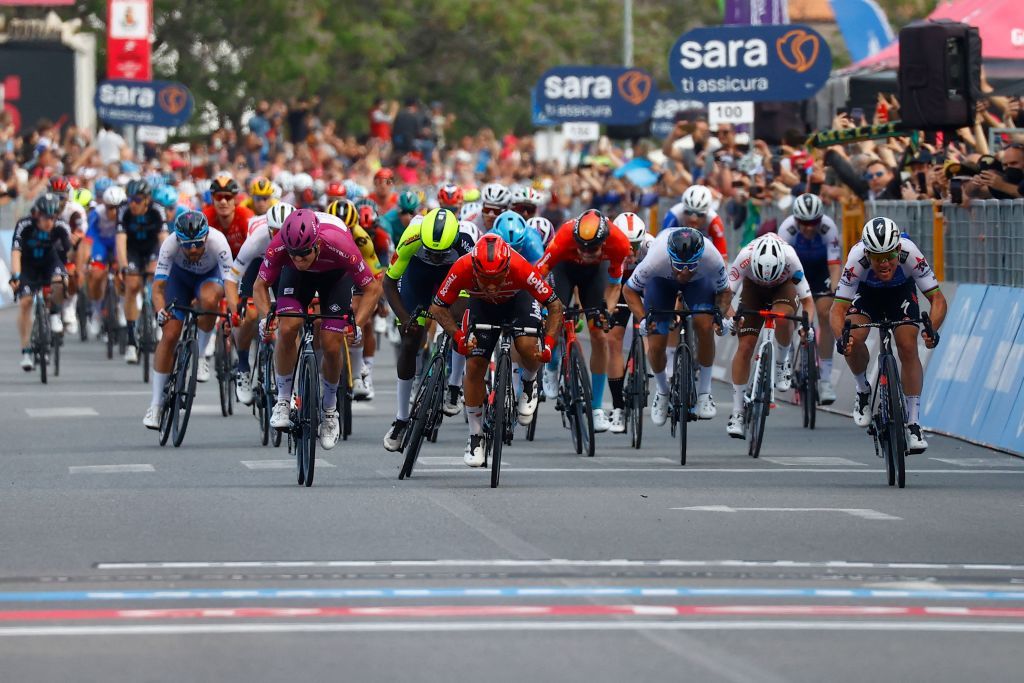 The race jury relegated Fernando Gaviria (UAE Team Emirates) on stage 6 of the Giro d’Italia after the Colombian clashed with the DSM duo of Alberto Dainese and Cees Bol in the home straight.

After being hampered by mechanical issues the previous afternoon, and publicly blaming his bike, there was more frustration for the Gaviria, who waved his arm in remonstration as he freewheeled to the line.

Gaviria had tried to spring out to the right in the final 300 meters, leaving the wheels of Arnaud Démare, Mark Cavendish and Caleb Ewan in favor of the DSM lead-out that was flying solo on the right.

He appeared to intend to plot a course straight through the middle of it, but there was no gap to be found between the wheel of Dainese and chosen sprinter Bol.

Gaviria made contact with both riders but somehow they all avoided crashing, even if they were all taken out of contention.

When the official final results were published, Gaviria’s name appeared in 150th place – relegated to the very back of the main bunch by the race officials.

UAE director Fabio Baldato spoke to Eurosport after the stage to offer his take on the incident.

“Yeah, looks like what I saw [Gaviria] was a boxed [in]. It’s hard to really say what happened we need to speak with him.

“The guys were doing the lead-out for Dainese and he stopped in the middle of the road. Gaviria was trying to go around at the same time Dainese started. Sadly, that can happen in the sprint. Neither of the guys wanted to express. what happened.

“They waited until last meter to come out because it was a really fast sprint with slight headwind. They all know that they need to come out at the last meter. And that’s what happened. It’s a sprint – it’s a thing that can be. “

The Australian also criticized the DSM duo for their communication, and the fact that Bol was to the right of Dainese instead of looking to hit out on the left, the shorter way through the slight finishing bend. However, when it came to the collision, he placed the blame squarely with Gaviria.

“It was a dangerous incident. He just made a bad calculation, a wrong decision, “McEwen said.

“Dainese was swinging off to get out of the way and took his own teammate out, but Gaviria diving in between them, was a complete blooper. It’s at home in the bloopers reel. It was a terrible decision.”